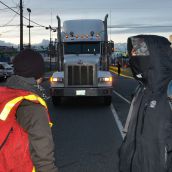 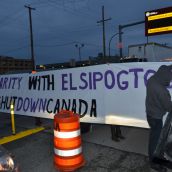 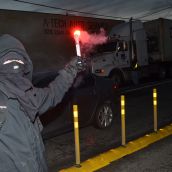 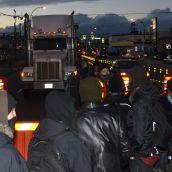 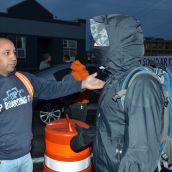 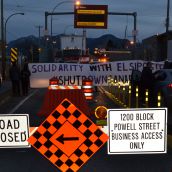 COAST SALISH TERRITORY – Activists blocked access to the federal Port of Vancouver for an hour early this morning as part of an International Day of Action in Support of  Elsipogtog Land Defenders in New Brunswick.

Access to the Port at the foot of Clark Drive was blocked for an hour. Traffic was backed up as far as as the eye could see. The adhoc coalition of activists blocked the road with a banner reading Solidarity with Elsipogtog and #ShutDownCanada.  The group said it condemns fracking for poisoning water and boosting carbon emissions and decries “the brutality of the RCMP response, and their ongoing collusion with corporate interests.”

“We stand in solidarity with Land Defenders everywhere – from the Mi’kmaq in New Brunswick to the Unis’tot’en in British Columbia – who are fighting rampant and reckless resource extraction, which is the face of modern…