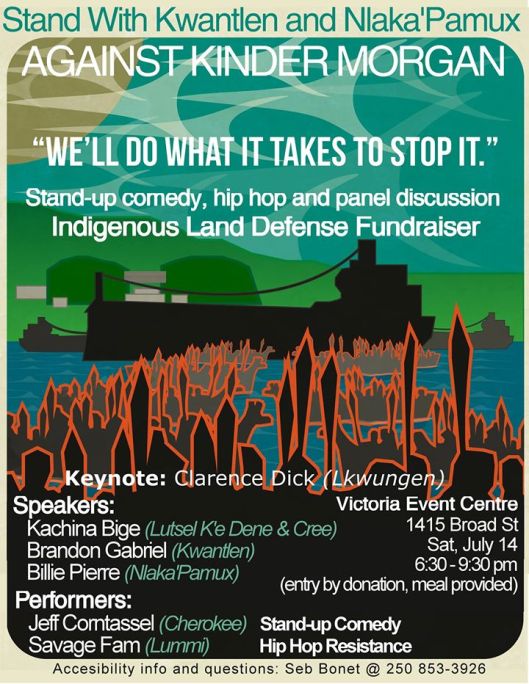 <<This event is taking place on Lkwungen Territory. We would like to gratefully thank local carver and artist Clarence Dick for being the key note at this event.>>

UPDATE: Tentative Timing and Order for the Expanding Event!

Kinder Morgan wants to start construction on the Trans Mountain pipeline expansion in September. For Kwantlen and Nlaka’Pamux Nations, Kinder Morgan’s plans represent the continuation of 150 years of colonial encroachment, which they continue to resist and resurge against.

We invite you to come and hear from keynote speaker Clarence Dick from the Lkwungen Nation, as well as Kachina Bige (Cree and Dene from Lutsel K’e) and Brandon Gabriel from Kwantlen Nation about the history of their territory (which stretches from New Westminster, Surrey, Maple Ridge, Mission, Langley, Glen Valley, and Fort Langley ), and their plans to begin construction of a Healing Lodge in the path of the expansion, among other elements of their planned and ongoing resistance.

We will also hear from Billie Pierre from Nlaka’Pamux. Billie lives in Merritt, and has been actively involved in the grass roots Indigenous movement since 1995, and will also speak to her people’s long struggle against colonialism, which she has been directly involved in since the mid-90’s, and share her wisdom from the grassroots about impacts the Trans Mountain expansion project has already had, and the ways her people are resisting it.

There will also be a stand-up performance from Jeff Corntassel, who is Tsalagi (Cherokee), and hip-hop by Savage Fam, from Klallam.

This event is a fundraiser for grassroots resistance to Kinder Morgan; its details are still being finalized. We will be requesting donations on a sliding scale from $0-$15 at the door to support our panelists.

If you can’t make this event, but would like to hear video recordings from these speakers, try these links:

http://bsnorrell.blogspot.ca/2017/03/vancouver-stoking-sacred-fire-live.html (the whole panel is amazing; Brandon and Kachina begin at one hour and 2 minutes)

To keep up with Kwantlen resistance and donate directly to them: http://standwithkwantlen.org/

WHO IS ORGANIZING THIS EVENT:

Details for this event are still being finalized. It is being coordinated by some of the people who participate in an informal, relationship-based network called OUST Victoria. Please contact Seb Bonet (jsbonet@gmail.com, 250-853-3926) if you have questions or concerns about who is organizing this event, or how it has been put together. We would also like to thank Social Justice Studies at UVic for donating to make this event happen. 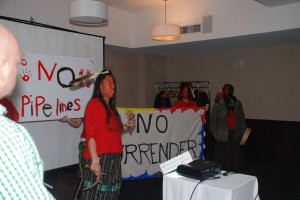 Secwepemc Women Warrior Society said a resounding No! to the Kinder Morgan pipeline today at an illegal engagement session between government and elected chief and council in Kamloops. The session was to push forward the federal government’s recent Eyford report on West Coast energy infrastructure and supposed “tanker safety”.

by PIPE UP Network

Less than a week ago, a 65 year old pipeline in Little Rock, Arkansas broke, spilling  more than 300,000 litres of heavy oil from the Canadian tar sands, into local neighbourhoods. CNN described the product as a “smelly, asphalt-like crude” and Exxon Mobil revealed that the pipeline had been transporting Wabasca diluted bitumen which is similar to the product that is transported by Kinder Morgan on their Trans Mountain pipeline that cuts through many neighbourhoods and near schools in the lower mainland. Photos from the spill showcase the consequences within the small town and provide insight into the risks associated with transporting the product. END_OF_DOCUMENT_TOKEN_TO_BE_REPLACED

“These people from Texas are billionaires. They make almost a million each ship that comes into my inlet… It’s not if they have a spill it’s when they have a spill…it’s gonna kill everything including ourselves… It’s time to warrior up and stop them right now.” – Tsliel-Waututh Elder, Ta’ah George at the ‘She Speaks’ event last Sept at the Native Friendship Centre in East Vancouver END_OF_DOCUMENT_TOKEN_TO_BE_REPLACED