Protestors have shut down a pipeline construction site in Innerkip, Ontario, and plan to stay “indefinitely.”
BY Laura McDonald

Another construction site along Enbridge’s Line 9 pipeline has been occupied this morning – at least the third in three weeks – and this time protestors are planning to stay. END_OF_DOCUMENT_TOKEN_TO_BE_REPLACED

Protesters from Six Nations and other parts of southwestern Ontario stopped work at a dig on a portion of the Line 9 pipeline in North Dumfries Thursday morning.

According to a statement from protesters, a group marched onto a work site east of Highway 24 near the Grand River between Cambridge and Brantford around 10 a.m. Thursday. They say Enbridge’s employees are working without consent or consultation on land that is on Haudenosaunee territory.

“We’re against the pipeline, the construction, the bitumen tarsands oil running through this pipeline running across the Grand River territory… without proper consultation [with] our people,” said Missy Elliot, a Six Nations spokesperson.

The dig site is just north of Beverly Court and East of Highway 24 in North Dumfries between Cambridge and Brantford. (Google)

Elliot said Six Nations was not consulted in advance of the construction and they only became aware of the dig when information pamphlets were delivered to area residents.

“They are supposed to consult and accommodate indigenous people,” said Elliot.

Protesters at the site said Enbridge staff left the area peacefully with their heavy equipment after speaking with protest members and local police.

Janice Lee, who came from Kitchener to show support for the protest group, said members of Six Nations initially approached Enbridge staff and told them they were on treaty territory without consultation and asked them to leave.

“They’ve left but it seems like they keep sending people back and forth to check on us,” added Lee.

Despite the claim by Six Nations that they were not properly consulted, Enbridge spokesperson Graham White told CBC that the company had met with representatives of Six Nations and that Thursday’s work was part of a routine inspection of the pipeline.

“When we talk about integrity digs this is one of the many things we are doing to ensure the safety of this line,” said White.

“We go down and at minimum remove the coating and do a visual inspection and other in field inspections of the pipe and take any measures necessary to repair that or maintain that pipe to a level of very good integrity.”

White added hundreds of similar digs have been completed along the pipeline between Sarnia and Montreal.

North Dumfries protest one of many

Though some protesters have faced arrests and legal challenges, they are still continuing to protest Enbridge integrity digs.

In March, the NEB approved a request from Enbridge to reverse the flow and increase the capacity of the controversial Line 9 pipeline that has been running between southern Ontario and Montreal for years.

Line 9 originally shuttled oil from Sarnia, Ont., to Montreal, but was reversed in the late 1990s in response to market conditions to pump imported crude westward. Enbridge now wants to flow oil back eastwards to service refineries in Ontario and Quebec.

It plans to move 300,000 barrels of crude oil per day through the line, a rise from the current 240,000 barrels, with no increase in pressure.

END_OF_DOCUMENT_TOKEN_TO_BE_REPLACED

One oil spill in his community was more than enough for Kalamazoo resident Christopher Wahmhoff.

To protest Enbridge’s replacement of the pipeline that burst along a Michigan riverbank in 2010, Wahmhoff spent 10 hours of his 35th birthday inside the new pipe, slowing construction for a single day in June. [See “Activist Has Climbed in Enbridge Tar Sands Pipe in Michigan” for the story.] END_OF_DOCUMENT_TOKEN_TO_BE_REPLACED 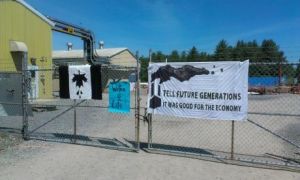 Swamping the Courts: Disruption All Around!

On August 14th 2013, in a courtroom filled with individuals facing charges stemming from Swamp Line 9 and their supporters, some powerful and wild acts of solidarity occurred. As our friends and comrades went up one by one in front of the judge, people expressed their support with hand claps and a few hoots, leading to threats by the judge for us all to be removed from the courtroom. END_OF_DOCUMENT_TOKEN_TO_BE_REPLACED 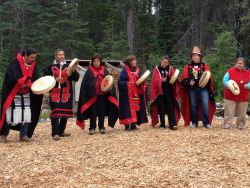 From July 10th to 14th, roughly 200 Indigenous and non-Indigenous people gathered in unceded Wet’suwet’en territory in central British Columbia for the 4th Annual Unis’tot’en Action Camp. The Unis’tot’en clan of the Wet’suwet’en First Nation have maintained a blockade on the only bridge leading into their territory since July 2010 in an attempt to keep seven proposed oil and gas pipelines off their traditional lands.