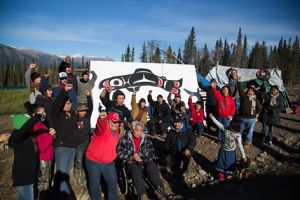 Today – our spirits are high. In the Supreme Court this morning, a multi-million dollar mining corporation, Imperial Metals, was denied a permanent injunction against the Klabona Keepers. Although an interim injunction was granted, the enforcement order is being held over until October 14th allowing the court to be moved to Terrace so the Klabona Keepers’ youth and elders can attend and prepare for the hearing.

Ultimately, this is an incredible victory – not only for the Klabona Keepers, but for all Indigenous Nations connected by the water and the salmon. Our incredible allies from Secwepemc territory, Kanahus and Anushka, and Klabona Keeper, Loretta, overcame all odds in the colonial court today to seek justice.

As the sun shines down upon us at our Grandmothers’ fire – we celebrate. We feel the power in unity of grassroots indigenous peoples who are exercising traditional governance and customs in the face of state control and bureaucratization, who are opposing corporate development on their lands. We can not thank all of our supporters enough for standing with us today.

“A handful of Tahltans have turned this entire situation into a circus and there are clowns, both Tahltan and non-Tahltan, speaking out everywhere” Chad Norman Day

As a leader of the nation, we feel he is supposed to represent us not dictate to us. As of today, the community members that use, occupy and protect the Tl’abāne territory, signed below, withdraw our names from the Tahltan Central Council.

The Klabona Keepers’ elders and youth have successfully protected the Tl’abāne from unsustainable development that puts our future generations at risk. If it weren’t for us, Royal Dutch Shell would have extracted natural gas in the Sacred Headwaters to the detriment to the Skeena, Naas and Stikine rivers. At times our actions have been met against the wishes of the Tahltan Central Council.
The Tahltan Central Council is solely a society registered through the BC Society Act, this does not respect or recognize our sovereignty and responsibility to manage and make decisions on these lands collectively. The Tsilhqot’in decision proved that title and rights has to be held collectively by the users and occupiers of the territory. We collectively use and occupy the Tl’abāne with the traditional guidance of our elders. That means all decisions with this land have to go through us. Tahltan Central Council cannot use “Klabona Keepers” name in government meetings anymore for leverage.
We choose not to compromise our lands, water and culture. We live on the land and have a right to self-govern ourselves rather than have an imposed centralized government society represent us.