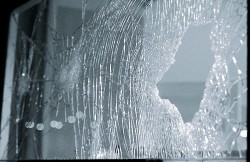 Early morning, on Wednesday November 6th a Royal Bank Of Canada had all 2 of their ATMs smashed and 4 of their windows. This was an easy target as it was far on East Hastings in Burnaby. The RBC was attacked because they help fund the most destructive project on earth, the Alberta Tar Sands.

The next early morning, a Chevron on 1st and Nanaimo had 9 of its 12 pumps smashed, effectively shutting it the fuck down. This has no doubt cost Chevron tens of thousands of dollars due to damages and lost revenue. It was easily done with a hammer and took about 1-3 swings each pump. Chevron was attacked because it is a majority shareholder of the Pacific Trail Pipeline. The Pacific Trail Pipeline (PTP) is an already approved Natural Gas pipeline but the Unist`ot`en** have built a blockade right on the path of this pipeline. As anarchists we have nothing but solidarity for the Unist`oten and will do everything we can to assist them in their struggle against all corporations who wish to destroy their land and the colonial governments who wish to assist the corporations as it runs parallel with the anarchist struggle.

To other activists and environmental groups, this anti-pipelines movement will either be anti-capitalist or nothing. It will either be a mix of violent tactics and peaceful ones or it will be ineffective. It will either be against this colonial government or unsuccessful. We understand the misery and despair of this society and capitalism can be very uninspiring and depressing but there is nothing more liberating, while this society exists, than to smash, burn, loot and bomb something that is smashing your life everyday.We hope these actions inspires you to take some risks. Find your comfort zone and then challenge it.
We understand that it can be scary to commit illegal acts so its best to start small and gain your confidence and skills. Try post[e]ring around your city and move on to paint bombing to targeted graffiti. So on and so forth. The best way to break a window is on the corner where there is less flex. An ATM takes one or two strikes with an hard object. Be careful with ATMs through they usual have high definition cameras so cover your whole face. Glasses or snow goggles would work great. Dress is loose black clothing bearing no logs. If you use other clothing ditch it right after. Black shoes work great. You can also wear different colour shoes and wear socks over them and ditch the socks after you caused some havoc.
FUCK PACIFIC TRAIL PIPELINE! FUCK THE NORTHERN GATEWAY PROJECT!
DESTROY WHAT DESTROYS YOU!
NO PIPELINES ON STOLEN NATIVE LAND!
FAI – Informal Anarchist Front
LONG LIVE ANARCHY!
SOLIDARITY FROM OCCUPIED COAST SALISH TERRITORY TO COMRADES WORLDWIDE
**Here is an excerpt from their website:
“The Unist’ot’en Camp is a resistance community whose purpose is to protect sovereign Wet’suwet’en territory from several proposed pipelines from the Tar Sands Gigaproject and shale gas from Hydraulic Fracturing Projects in the Peace River Region.
Wet’suwet’en territory, which extends from Burns Lake to the Coastal Mountains, is sovereign territory which has never been ceded to the colonial Canadian state; the Wet’suwet’en are not under treaty with the Canadian government. Their territory, therefore, is and always will be free, and belongs to the Wet’suwet’en people alone.
Since July of 2010, the Wet’suwet’en have established a camp in the pathway of the Pacific Trails Pipeline. Likhts’amisyu hereditary chief Toghestiy states, “Unist’ot’en and Grassroots Wet’suwet’en have consistently stated that they will not allow such a pipeline to pass through their territory. The federal and provincial governments, as well as Indian Act tribal councils or bands, have no right or jurisdiction to approve development on Unist’ot’en lands. By consulting only with elected Indian Act tribal councils and bands, the Canadian government breaks its own laws as outlined in the 1997 Supreme Court of Canada Delgamuukw decision which recognizes Hereditary adjudication processes.”
Freda Huson, spokeswoman for the Unist’ot’en Clan, states: “Pacific Trails Pipeline does not have permission to be on our territory. This is unceded land. Through emails and in meetings, we have repeatedly said NO. Pacific Trail Pipeline’s proposed route is through two main salmon spawning channels which provide our staple food supply. We have made the message clear to Pacific Trails, Enbridge, and all of industry: We will not permit any pipelines through our territory.”
The Unist’ot’en clan is against all pipelines slated to cross through their territories. This includes Enbridge Northern Gateway, Pacific Trails, Coast Gas Link, Kinder Morgan’s northern proposal, and others. Pacific Trails Pipeline is the most pressing and immediate threat to the community. Enbridge pipeline would be built side by side to – with essentially the same right of way as Pacific Trails, thus raising concerns that the Pacific Trails Pipeline might ‘blaze a trail’ for the Enbridge project.“