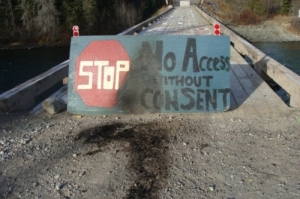 An attempt to destroy the main Unist’ot’en sign with a home-made explosive accelerant occurred last night at approximately 10:20 p.m.

The Unist’ot’en camp located around 70 kilometres south of Houston has been in place since 2010 in response to proposed pipelines such as Enbridge’s Northern Gateway and Pacific Trails’ liquid natural gas line.

Last night individuals living at the camp heard what sounded like a gunshot and they immediately took steps to make sure they were protecting themselves.

“We were in the main cabin and a soon as we heard the bang we shut off our lights, grabbed firearms, went outside and fired a warning shot,” Toghestiy (Warner Naziel) said.

Toghestiy investigated the scene on the north side of the bridge where he could see fire burning. He found a few canisters of ‘accelerant’ bound together with bright green surveyor tape and a long trail of ‘accelerant’ leading north along the road away from the bridge, which was used to reach the canisters, he said.

“When I was approaching the site I could see headlights heading away from the bridge,” Toghestiy said.

The Unist’ot’en have renewed the traditional protocol of free, prior and informed consent in regards to accessing Unist’ot’en territory for any reason.

To accomplish the protocol a soft blockade has been employed on a bridge crossing the Morice River, where every person wishing to enter Unist’ot’en land has to answer questions. One such question is: How will your visit benefit the Unist’ot’en? Failure to give satisfactory answers gives the Unist’ot’en grounds to prevent access for whatever purpose sought.

One group of young men from the Houston area have reportedly taken issue with the Unist’ot’en protocol, Freda Huson, Unist’ot’en member and resident of the camp, said.

“A group complained to the RCMP about our protocol,” Huson said, but she’s not sure if it’s the same group responsible for last night’s event.

RCMP have yet to investigate the scene.

A hunter from the Tumbler Ridge area, who answered the protocol questions properly, shared that he heard a group of young men were angrily talking about the Unist’ot’en and the group claimed they were going to ‘do something about it’, Huson said.

“It may have been the people who honked at the bridge but didn’t wait for us to come ask the protocol questions,” Huson said. “I believe it’s the same group that destroyed our sign at the 44 kilometre mark.”

The Unist’ot’en are asking anyone with information about who is responsible for last nights events to please contact the Houston RCMP at 250-845-2204.