The impacts of industrial development in the area now known as Chemical Valley are deep. The relationship between the 63 petrochemical industries and the occupied lands they are on is not a coincidence.

The devastating affects corporations like Imperial Oil, Enbridge and Polysar have had on the environment, through contamination and corporate irresponsibility disproportionately impact bordering, and downstream Indigenous communities such as Aamjiwnaang and Walpole. The SunCor Energy refinery alone is responsible for processing 85,000 barrels per-day of gasoline, kerosene, jet and diesel fuels.
In the face of already environmentally devastating conditions in a political context of apartheid against Indigenous peoples, those already impacted by Chemical Valley now seek to say No to further industrial expansion – the proposed Line 9 reversal which will bring Tar Sands crude project much further East. In the spirit of standing ground and speaking out, local First Nations and Sarnia-settler community members as well as supporters from other regions, gathered together at Sarnia’s City Hall at 11am on Tuesday May 21st, 2013.

Mike Plain, Anishinabe, Elder, and Aamjiwnaang community member opened the day’s events with an acknowledgement to all of Creation, reminding us that we are not separate from the natural world. Corrine Tooshkenig, Anishinabe-kwe, Elder, and member of Walpole First Nation, spoke to the importance of involving youth in the protection of Mother Earth and resistance to injustices. She led a water acknowledgement, reminding us of our connection to and the importance of water in our lives. Indigenous and non-Indigenous participants were invited to offer tobacco to the water with a spirit of gratitude and healing. She spoke of our relationship with our water, how water takes care of us, and how we have a responsibility to speak for the water now. Next Sam Elijah, Anishinabe-kwe, mother and member of Kettle & Stony Point First Nation spoke to the importance of inter-generational responsibility. Sam expressed her concerns about the ongoing and devastating impacts of the contamination and toxification of the land-base for both our current and future generations.

Local Indigenous and non-Indigenous community members, including elders, mothers and outspoken youth, as well as regional supporters left City Hall to take to the streets. The march, chanting, and carrying banners and signs reading, “No More Chemicals In The Valley”, “Stop Line 9″, “Tar Sands Kill! Pipelines Spill!” and “Cancer Alley” continued on to the site of a Tar Sands industry conference being held at the Best Western Hotel.
The conference, Bitumen Adding Value: Canada’s National Opportunity, was held for the purposes of strategizing to maintain and expand the slow industrial genocide of the Tar Sands in so-called Canada. In an effort to continue cultivating colonialism, investors and resource extraction industry representatives met to articulate their dream of a world of pipelines, upgraders and refineries — as well as the mega-load modules necessary to secure that infrastructure. Support from settler governments is expected along the way. The primary goal of shipping tar sands products much further East, to as far as traditional Mi’kmaq and Maliseet territories in so-called New Brunswick, was discussed at length through various presentations.
In a conference whose tone focuses on the continuing land-theft and exploitation of Indigenous territories and communities, there was an atmosphere of racism which was palpable. Among the sea of older White businessmen who dominated the space, Frank McKenna, Deputy Chair of the TD Bank Group and former Premier of New Brunswick, was one of the worst. With statements like “this is our land” and “these are our resources” directed to a group of White-settlers acts to directly invisibilize the ongoing history and reality of genocide and colonialism that are inherent to the nation-state of so-called Canada and the capitalist system it is under. The efforts to ignore and deny the imperial functions of industries such as resource extraction however were successfully disrupted by Vanessa Gray, an inspiring Anishinabe-kwe, community organizer and member of Aamjiwnaang First Nation. 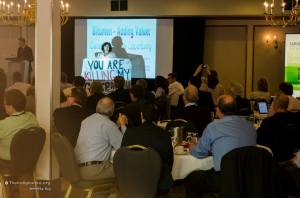 Amidst attempted discouragement of continuing the march route on to the Best Western, the Aamjiwnaang flag breached police lines as Mike Plain lead the break onto the Best Western — informing the O.P.P. that we were on Aamjiwnaang territory, welcoming demonstrators and supporters. Local community members and supporters then flooded the back lawn of the Best Western to hear Mike speak to his experiences living on the border of Chemical Valley in Aamjiwnaang First Nation. Demonstrators let off a siren to mimic the sound of the emergency siren that has been normalized for those living near the Valley. Demonstrators pounded on the windows of the hotel in excitement and in support of the action taken by Vanessa inside the conference. During the keynote presentation, Vanessa Gray took the stage with a banner that stated, “YOU ARE KILLING MY GENERATION”. After being harassed by security and undercover police, and threatened with arrest Vanessa chose to exit the building to meet up with supporters outside after reclaiming and holding that space.